Did you play with sticks or stones as a kid? How about now? Do you find gyms a bit boring? If so, join us at Earthgym for our Earthgym is everywhere! It is all the living terrains of our planet – our city parks, the open fenced lands and our gated wild lands. It is up in the trees, on the beaches, by the rivers, in the mountains and in our own back yard.

We learn through movement, as life is motion. Our bodies are amazing instruments and through movement, exploration, play and training with simples tools of the earth, we tone and tune our musing muscles to connect with and receive teachings, creativity, aliveness, wisdom and Joy from the Earth and life all around us.

Training in the land of the living (the outdoors) awakens our senses and our imagination. We remember and recover our primal, practical and playful soles. This helps our Souls shine brightly and walk our purposeful and soulful path on our Planet.

In Earthgym, we train with simple earth tools of sticks, stones, ropes, sacks and hammers.

I offer group and individual classes, workshops and coaching.

Learn the basics of form, and equip yourself with infinite tools of creative movement and inspiration you can use for daily training in our hometown/city parks, and also for quests into the mountains and our wild lands.

“Follow your feet and the Earth will teach!” This is our motto in Earthgym. What will the Earth teach you? We have no idea as the Earth’s teachings are different for each of us. 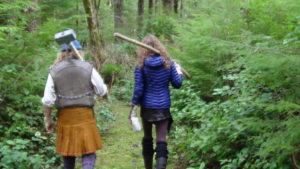 “With Earthgym, using the simple tools of bare footing, stone, stick, rope, sacks, hammers, we tone and tune our bodies and muscles and naturally draw in and receive Nature’s teachings and powerful Qi.”

My own journey with Earthgym ~ All paths lead to the Earth

All paths lead outside. All paths lead to the Earthgym. Every time I meet a challenge in life, stepping outside is part, if not the whole solution. If I’m feeling stress, or have a burning thought, or a stale and repetitive question, I step outside. If my back is hurting, shoulders tight, I step outside. If I feel foggy minded, seek clarity, or feel a bit of the dull haze of blah in my tissues, I step outside. Outside is LIFE! Even in the city, every chance life has, it seeps through the cracks of the sidewalks, streets, old buildings and shines its presence. In the Seattle area we are blessed with water, green trees, ferns, moss and so much Life – so many huge trees, city parks, surrounded by other open fenced lands and then the gated wild in all directions. Wilderness, wildness surrounds us and is inside of us…we just need to step outside.

Many years ago, I found myself in the middle of the dark and exhausting terrain of anxiety and depression.  I had a racing mind that frantically tried to find any way to solve my problems, to think its way through them again and again but only through the lense of fear, doubt and anxiety. Each morning I’d wake up, barely able to breathe a breath before the old thoughts came flooding in. Half a moment of dream-full awaking and then…the thick, dark fog of depression and fear was back and I was acutely aware I was inside.

Being inside was suffocating. I couldn’t stand to be inside. The walls of a home, …any home were sterile and only magnified my inner feelings of aloneness, despair (dis-pair) and separateness from life.

Instinctually I knew I needed to get outside. And I did. At the time, I was housesitting for a friend in Berkeley, California. I remember opening my eyes one morning, and seeing the white walls of the room, the closet across from me, and desk and printer to my right. It was silent, except for the sound of warm air beginning to blow in through the hallway vents on a cold February Berkeley morning.

“I Love how training and musing up through our muscles and bones the teachings of the Earth opens a sacred path of mystery, discovery and deepening Joy.”

While it was a peaceful scene, there was no danger, and I was safe and warm indoors, my stomach again began to turn. I felt nervous. This heaviness, yet at the same time flighty, bounciness in my gut gnawed at me, my heart and my soul. While I seemed an outward picture of peace to a stranger, I was ridden with fear and my body needed to move. I needed to get outside. The thought of staying indoors was unbearable.

I got up and dressed quickly, opened the doors, stepped out onto the wooden deck and took a deep breath of air. I immediately began to relax. The sunrays shone their golden rays through the winter rolling fog and onto the deck, across the lawn and onto the blooming citrus trees and sitting Buddha statue across from me. I stepped onto the grass and relaxed further. I breathed. I bent over to bring my nose to the delicate, tiny orange blossoms and breathed in their sweetness as sweetness filled my lungs and nourished my heart. My mind slowed and I saw and felt beauty.

In that dark depression, the thoughts, doubt, anxiety were so strong and overpowering, and at every point along my journey through that terrain, my greatest medicine, ally, and teacher was the outdoors, was nature, was LIFE. All it took was me stepping outside. I organized my life to have as much outdoor time as possible – sleeping with my windows open, stepping outside everyday first thing to practice my qigong, biking everywhere as my transportation, learning gardening and the natural history of our native California plants with a dear friend, then neighbor and mentor. We shared a meditation practice, both students of Thich Nhat Hanh and would often garden, hike and meditate both on the trail and in his garden.

I planted my own garden, worked outside in parks as much as possible, and when I needed to be inside, I’d work in a library next to a large window looking on to beautiful grandfather and grandmother oak trees. If I noticed my mind going in circles, my first response was to step outside, breath and notice, appreciate, soak in the amazing life around me — the clouds, radiant orange poppies, loving and strong redwood trees and the warm rays of sun.

At the time this was a way of survival, yet even though I didn’t know it yet, I was also building my foundation for “thrival”.

“Toning with stone and hammer both strengthens my inner muscle tone/tune and is also a tool to release, sing and ring! Hammering into the Earth helps me alchemize inner energies and thoughts and is a powerful portal for releasing prayers and decrees!”

A couple years later, I moved to Seattle and soon met one of my dear friends and mentors, Mick Dodge. While this depression was gone, and I was doing much better, continuing with my commitment of being outside each day, practicing qigong outdoors, biking as my transportation, gardening, I still had a persistent gnawing at my gut. I wanted to be out more. I wanted to explore the mountains and forests, the rivers and wilderness. But how? Where? I realized I had this rather silent but pesky thought and belief that I had to wait for someone to take me, and I didn’t know how. Yet once I realized it was a thought, I knew I could change it!

It was at this time I met Mick. We were both giving a talk at the Seattle Bioneers conference and were stationed in the same room. I gave a talk on Qigong & Conscious Language and he spoke after me about the Earthgym. He had arrived early and heard my talk and I stayed to hear his. Both intrigued by what each other had said, we met up afterwards to share. I was inspired and entranced by his stories of using simple tools of stone, stick, ropes and trees to touch more deeply and powerfully and playfully into the teachings, mystery and wonder of our Earth. He was in town a few days, so we met up at Green Lake Park several times to train.

I LOVED IT! Upon our first session, of swinging with ropes in the trees, moving with sticks and training with stones, I started crying. I was so happy!! I felt an aliveness and joy serge through my veins as a whole world of creative movement, exploration, discovery, play and wonder opened up before me. I realized the Earthgym is Everywhere! There are infinite terrains to move and train in, whether city parks, opened fenced lands of the countryside, or the gated wild. The Earth is constantly teaching and sharing. As I move my body, I am naturally filled with a playful and joyful spirit that opens me to learn and receive the magic and wonder of our Earth. This is a most powerful way to learn and train.

After that first few days of training at Green Lake, I took these Earth tools and trained and played daily. A few weeks later, Mick invited me to visit in the Hoh Rainforest. As I had recently moved to Seattle, this was my first time there and an inner doorway opened. I experienced coming Hohme to the land of these Giant Trees and moss, the magical land of OM (Olympic Mountains).

Coming Hohme to the Hoh ignited a thirst and passion to touch ever deeper into our glorious Wild Lands, to learn as much as I could from some of my Greatest Teachers, Master OG (Old Growth), our forests, rivers, mountains, and Mother Earth. The wilderness became my ultimate, sacred training hall. It also became my integration hall where I bring my studies and qigong teachings from the East and integrate these into my body in the wild lands of the West.

Earthgym is an engaging, creative way to use oue most powerful musing tool, our bodies, to receive the Earth’s teachings from the forests, valleys, mountains and rivers. It is a way I use my “gait” to enter so many enchanted, powerful wild “Gates” around the planet — gateways that lead both to my inner and our outer Wilderness.

I am so excited and passionate to share this primal, practical and playful practice of Earthgym. In moving our bodies on and with the Earth, we are muscles musing magic!

“Follow your feet and the Earth will teach.” What will the Earth teach you? I have no idea, for it is different for each person. But the Earth sings to all of us. Through touching deep, we hear and share the Legends of the Lands and in doing so, come home to our true purpose and service.